“Campaigners have issued a legal claim in their fight to halt the major A303 road project that would carve deep cuttings to a tunnel within the Stonehenge World Heritage Site (WHS).” 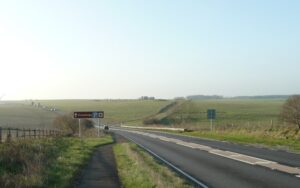 Save Stonehenge World Heritage Site (SSWHS) has applied for judicial review of Transport Secretary Grant Shapps’ decision to grant development consent to the eight-mile project that includes a two-mile tunnel past Stonehenge, with cuttings and tunnel entrances within the WHS.

A pre-action letter sent by Leigh Day solicitors on behalf of SSWHS did not receive a satisfactory response, and so a claim for judicial review was filed on December 22 before the December 24 deadline.

Permission for the A303 scheme was granted against the advice of a five-person panel of expert inspectors, the Examining Authority, who said the hugely controversial project would permanently harm the integrity of the WHS and seriously harm its authenticity. It will be argued that the scheme is contrary to the Wiltshire Core Strategy and the requirements of the World Heritage Convention.

The Stonehenge site, together with Avebury, was declared by UNESCO to be a WHS of Outstanding Universal Value (OUV) in 1986 on account of the sheer size of their megaliths, the sophistication of their concentric plans and their complexes of Neolithic and Bronze Age sites and monuments.

The prehistoric monuments and sites preserved within the WHS form landscapes without parallel, says UNESCO.

SSWHS says Mr Shapps’ decision to allow the road tunnel to be built alongside the site, with the tunnel entrance within, is unlawful. It makes its case on the following grounds:

– Harm to each heritage asset within the road project should have been weighed in the balance, instead of considering the “historic environment” as a whole

– The advice provided by Historic England did not provide the evidential basis for the Secretary of State’s conclusion of “less than substantial harm” to any of the assets impacted by the project. His disagreeing with the advice of the Examining Authority was therefore unlawful

– The Secretary of State failed to consider whether a grant of development consent (which would, even on his own conclusions, cause harm to the OUV of the WHS) would amount to a breach of international obligations under the World Heritage Convention

– The Secretary of State left out of account mandatory material considerations: the breach of various local policies; the impact of his finding of heritage harm which undermined the business case for the proposal and the existence of at least one alternative, namely a longer tunnel with less impact on the heritage assets

Tom Holland, president of the Stonehenge Alliance whose supporters set up SSWHS to take forward the legal action, said:

“Bearing in mind the weight of opposition to the Government’s plans for a highly intrusive road scheme through the Stonehenge landscape, it is hard to believe that the Transport Secretary has given them the green light. The Planning Inspectorate, after a painstaking, six-month investigation, advised against them. So too, appalled by the damage the Government’s plans would inflict on a World Heritage Site, did UNESCO. How the public feel can be gauged by the fact that over £46,000 has been raised to take the Government to court over the plans in only a few weeks. Let us hope that the law can come to the rescue of a landscape that ranks as our most precious and sacred, and which the Government – to its eternal shame – is set on handing over to the bulldozers.”

“Our client strongly believes that the Secretary of State’s approach to assessing the harm caused by this road scheme to the heritage assets in the Stonehenge area was unlawful, because he underestimated the overall impact by averaging it out and offsetting the purported benefits before appreciating the true extent of the damage. Our client will argue that, in doing so, the Secretary of State failed to follow national policy and breached international law under the World Heritage Convention.”

Campaigners are fundraising for their legal action and by December 22 had raised £46,746.

The Stonehenge Alliance has been very moved by the generous response to the Crowdjustice appeal.  If you wish to donate the link can be found here.

CROWDJUSTICE UPDATE: Since launching our appeal on 30 November we have raised a fantastic 90% of our £50,000 target. 21 days and we have barely £4,000 left to raise.
Consequently we can meet the Government's tight Christmas Eve deadline to submit our case.
Thank you🎄 https://t.co/5jVg47nw0O