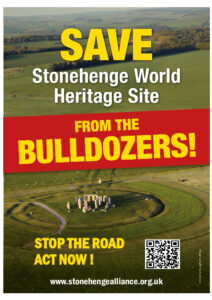 The decision to go ahead with the A303 Stonehenge scheme has been legally QUASHED.  The Transport Secretary must therefore redetermine the scheme i.e. decide whether to:

3. Ask for changes to the scheme requiring a new application.

National Highways has submitted its responses to the current Transport Secretary’s Statement of Matters and supports its discredited scheme application unaltered.

We need to persuade who ever is the next Transport Secretary otherwise.

The next Government administration needs to avoid international condemnation and save Stonehenge World Heritage Site from a devastating road scheme.

Write to your MP using your own words

It is more effective if you can compose a short email or letter in your own words.

What should I say?  Key points to include here.

Or, use this sample letter

Not only would this road scheme irreparably damage the landscape and its prehistoric archaeology, but UNESCO could reconsider the site’s World Heritage status if it goes ahead.

The case for the scheme rests on the shakiest of economic foundations. There is no realistic prospect of end-to-end dualling of the A303 in the foreseeable future, so all it would achieve would be to shift traffic jams a few miles down the road.

As host to world leaders in addressing the climate crisis at COP26 we expect to see all government decisions contributing to rapid reductions in CO2 emissions.  But the Stonehenge scheme is one of the worst offenders in this regard and would add nearly 2.5 million tonnes of emissions in its building and operation.

Surely this is the time to abandon this hugely expensive scheme, protect our most iconic World Heritage, and pursue low carbon alternatives instead?

Please ask your MP to ask the Transport Secretary to ditch this scheme.

Or write to the Prime Minister at No 10:

Do you live outside the UK?

If you live outside the UK please consider writing to the local British Ambassador (or High Commissioner) and your country’s Culture Secretary urging them to forward your concerns to the British Government.

What did your MP say in reply?

We’d love to know what the MPs say.  Please can you forward your MP’s response?  Email: savestonehenge@gmail.com

How should I respond to my MP’s reply?

Here are some suggested responses to typical replies by MPs.  This campaign is complex. Please do not hesitate to ask for help.  Email savestonehenge@gmail.com

Have you signed the petition?

The petition is live on line until the final decision has been made.  Please sign here and share.

THANK YOU for taking action!