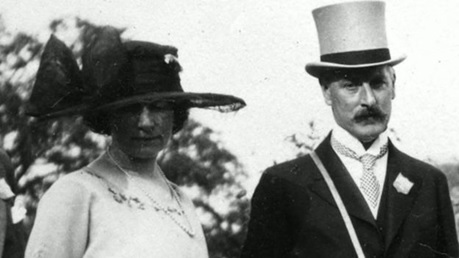 Lady Chubb with her husband Sir Cecil Chubb, donors of Stonehenge to the nation in 1918. Image source here

Today is the centenary of the gift of Stonehenge to the nation by Sir Cecil and Lady Chubb. This weekend, English Heritage is marking the occasion with a specially commissioned tea party designed by Jeremy Deller and an installation of his work, “Sacrilege”, an almost life-sized inflatable Stonehenge.

A joyous public celebration for some, but for many others it could mark impending sacrilege for the nation’s most famous World Heritage Site.

Highways England applied only a week ago to the Planning Inspectorate for a Development Consent Order to build the A303 tunnel and Expressway, disregarding all pleas to afford the World Heritage Site the respect it deserves. Many specialists and thousands of people from around the world loudly condemn the scheme.

Professor Mike Parker Pearson, leading expert in British Neolithic archaeology, speaks out about the Stonehenge tunnel in a newly released video “Stonehenge tunnel sets a bad precedent” to share his profound concerns.  At barely 3km long the tunnel would be too short within a World Heritage Site that is more than 5km across, full of prehistoric monuments.  Mike reminds us that the UNESCO World Heritage Site is

“a designation of an entire landscape. It’s one of the few places, not just in Britain but in the World, where you can see a special, sacred landscape developed over thousands of years.”

Will the UK Government finally come to its senses and re-consider the A303 road-widening scheme and the damage it would do to our World Heritage Site? It isn’t too late to call a halt and heed the advice of UNESCO and other internationally acknowledged experts.

A less damaging solution would properly and rightly protect the remarkable surroundings of Stonehenge about which we now know so much more than we did a hundred years ago.

For more information, please see our comprehensive briefing about the A303 Stonehenge scheme.