Case against A303 Stonehenge scheme strengthens 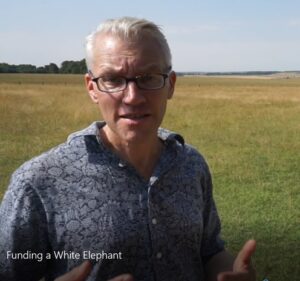 Following the quashing of the A303 Stonehenge road scheme Grant Shapps’, currently redetermining the project, invited people’s views on National Highways’ submissions justifying the same scheme.   Around 1,200 responses were published today, 26 April on the Planning Inspectorate’s website including our response.

The Stonehenge Alliance has highlighted that the economic case for the tunnel, already in the red, is now far worse with rising construction costs and a heritage valuation survey that is no longer valid.  Tom Holland said: “There is only one sane outcome to this process and that is for Grant Shapps to refuse permission for this highly damaging road scheme … If Grant Shapps refuses to take the sensible course and tell National Highways to go away and come back with something better, then at the very least he should hold a new public examination.”  Our press release can be read HERE. 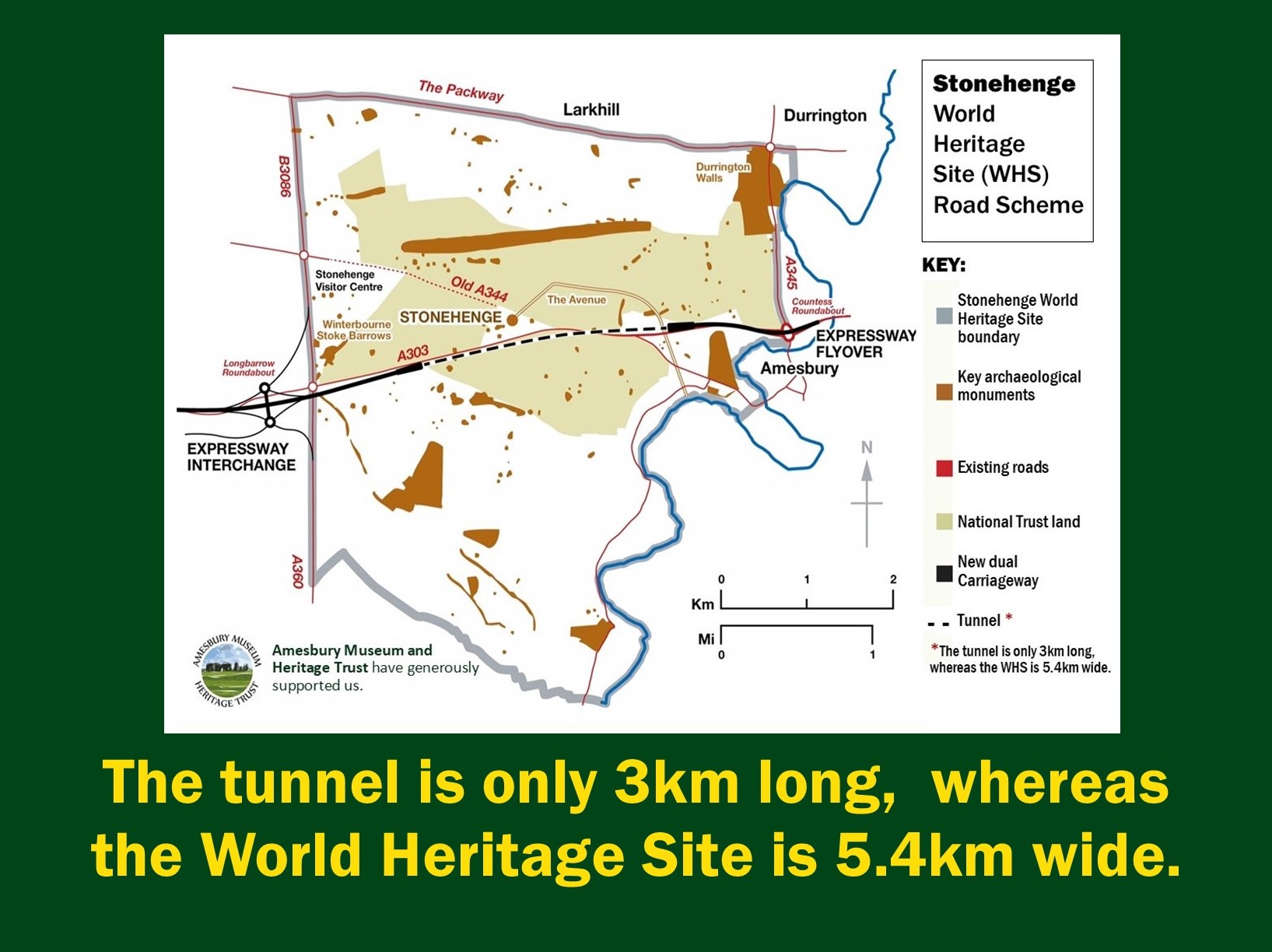 You can view map, images and visuals of the scheme here.

World Heritage Site: A status worth fighting for? 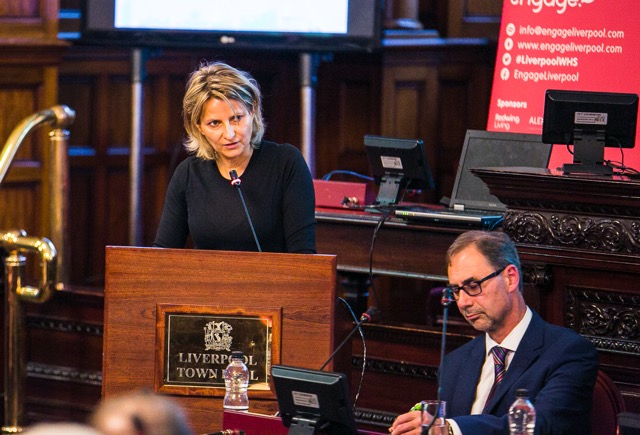 UNESCO was founded in 1945 to build “peace in the minds of men and women” when nations wished to work together to protect the most significant heritage from armed conflict.  Dr Isabel Anatole Gabriel, then Chief of Europe and North America for UNESCO’s World Heritage Centre, answers the above question as it applied to Liverpool Maritime Mercantile City World Heritage Sitein 2017, now delisted.  Dangers to World Heritage are not usually from armed conflict but more often from the antagonism between development and heritage.  Her presentation applies as much to Stonehenge as it did to Liverpool.  You can WATCH and read the transcript HERE.

The Stonehenge Expressway: an eloquent emblem of a failed transport policy 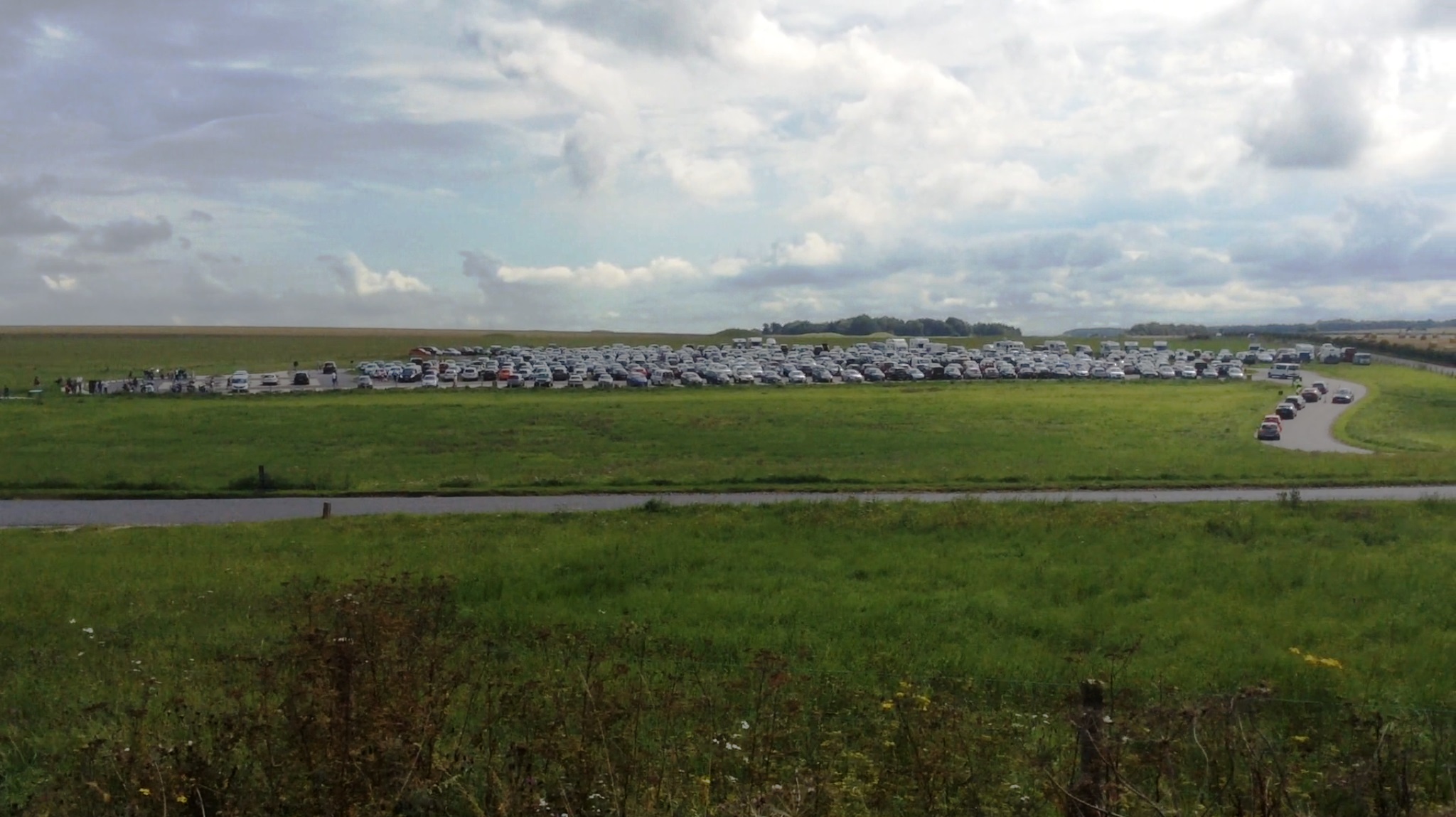 Response to consultation by Professor Tim Marshall: Nothing has changed since 2017 other than greater awareness of the urgency to reduce carbon emissions, and the damage caused to our heritage and environment, by providing for increasing numbers of car journeys leading the vicious circle of more congestion. READ BLOG BY GUEST AUTHOR

PART ONE: What is planned? 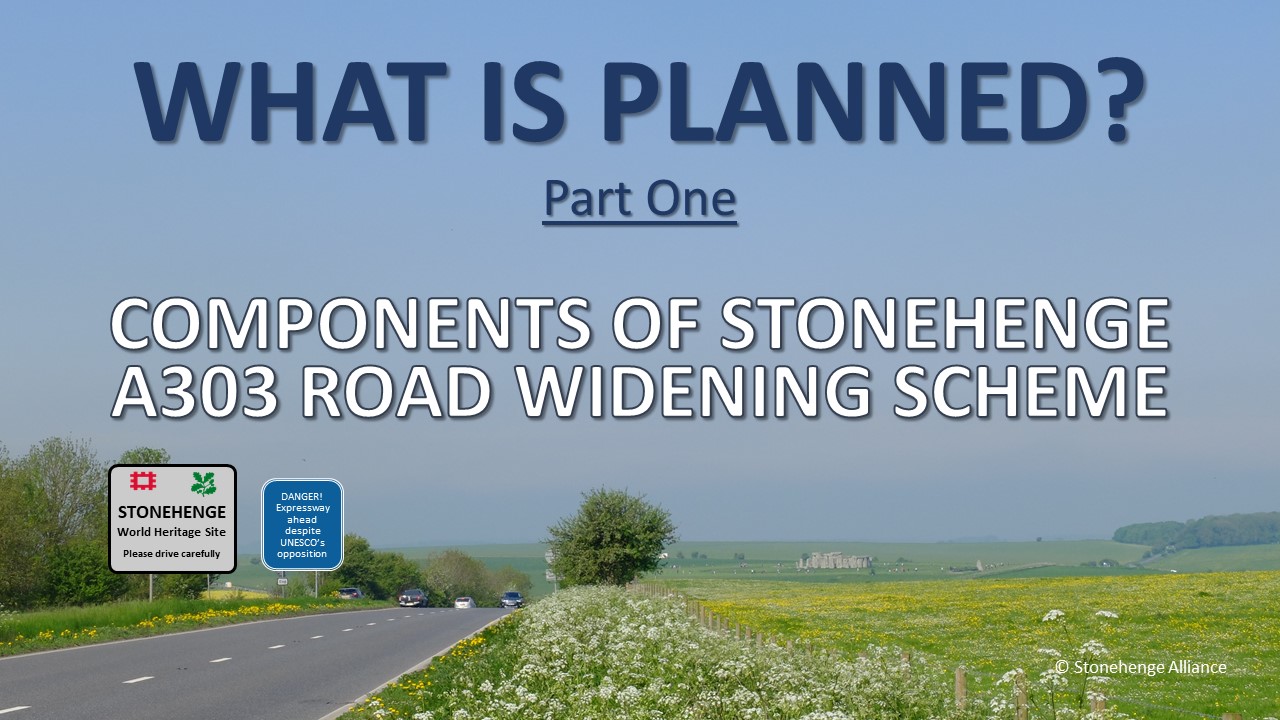 Part One: What is planned? is the first of a series of summaries about the components of the Stonehenge A303 road widening scheme presented here as a slide show and video.    SCROLL THROUGH SLIDES OR VIEW VIDEO HERE 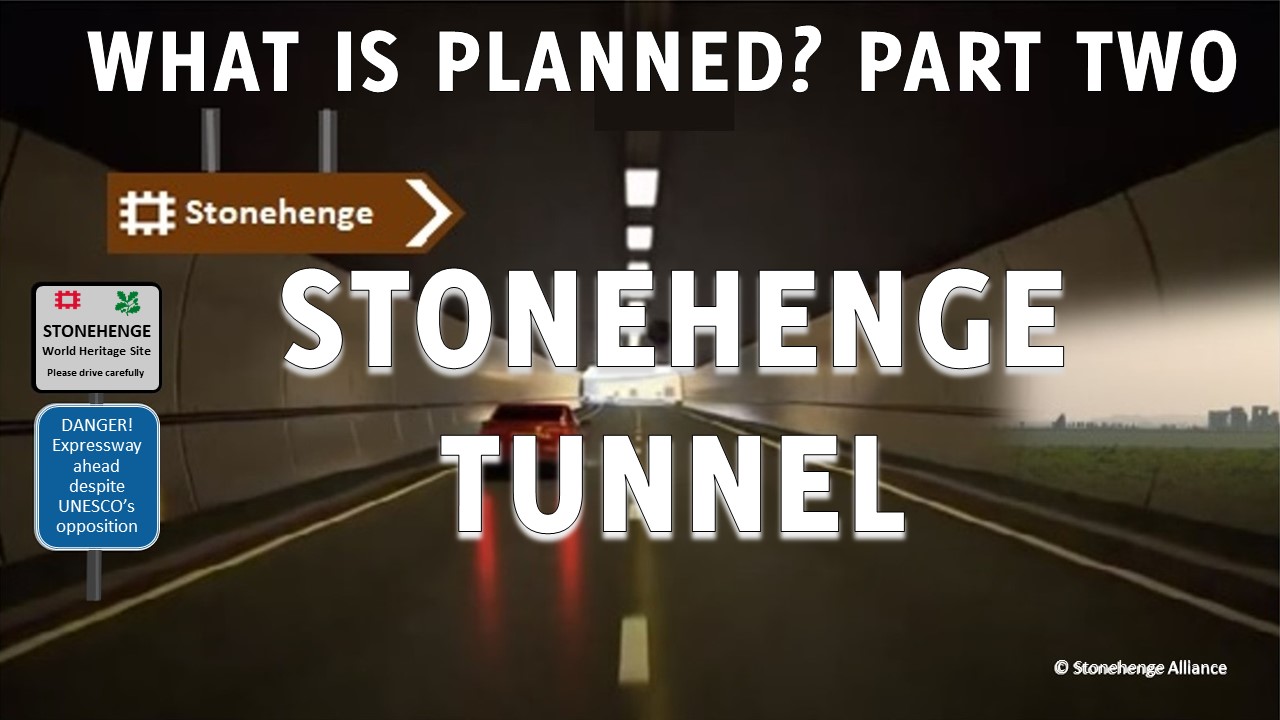 Continuing our slide presentation “WHAT IS PLANNED? Part Two” is a summary description of the construction of the tunnel, spoil and what happens to the spoil based on information presented to the Examination.  SCROLL THROUGH SLIDES OR VIEW VIDEO HERE

WHAT IS WRONG WITH THE TUNNEL?  AND OTHER FAQs 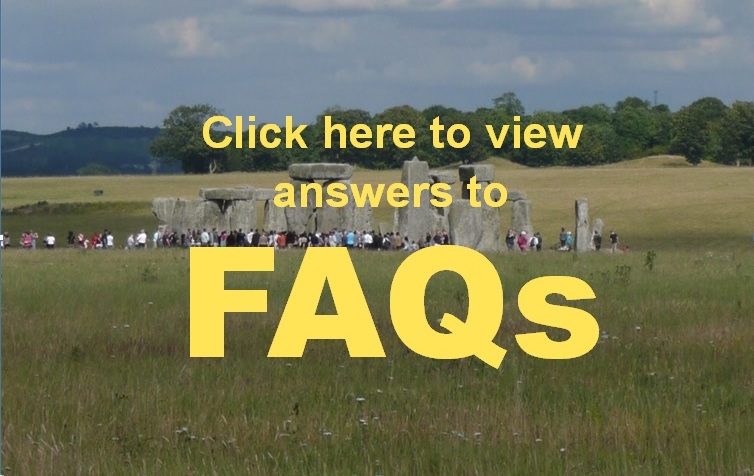 What is wrong with a tunnel?  Wouldn’t a tunnel be a great improvement for visitors? Why can’t Highways England widen the existing road?  What are the alternative to a 3km tunnel?  Why do you not have a petition on the UK Parliament site? What were the results of the consultations?  YOUR TOP FAQs ANSWERED!

Redetermination: Transport Secretary wants to hear from you! 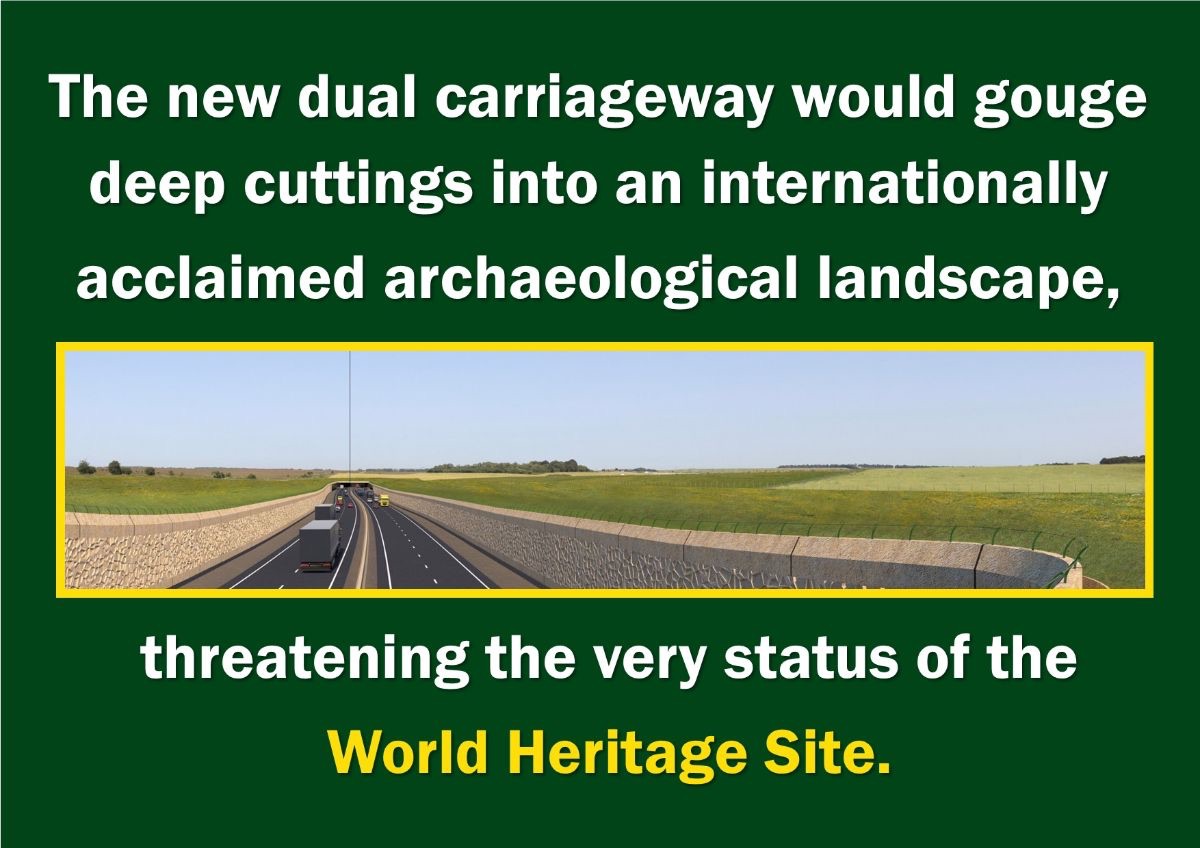 Western portal proposed by National Highways in 2019 and re-proposed in 2022.

The Secretary of State for Transport wants to make a new decision on the Stonehenge road scheme.  National Highways has responded to his key matters and continues to support the existing scheme, unchanged.  Please include some or all of the points we suggest by 4th April explained in our blog HERE. 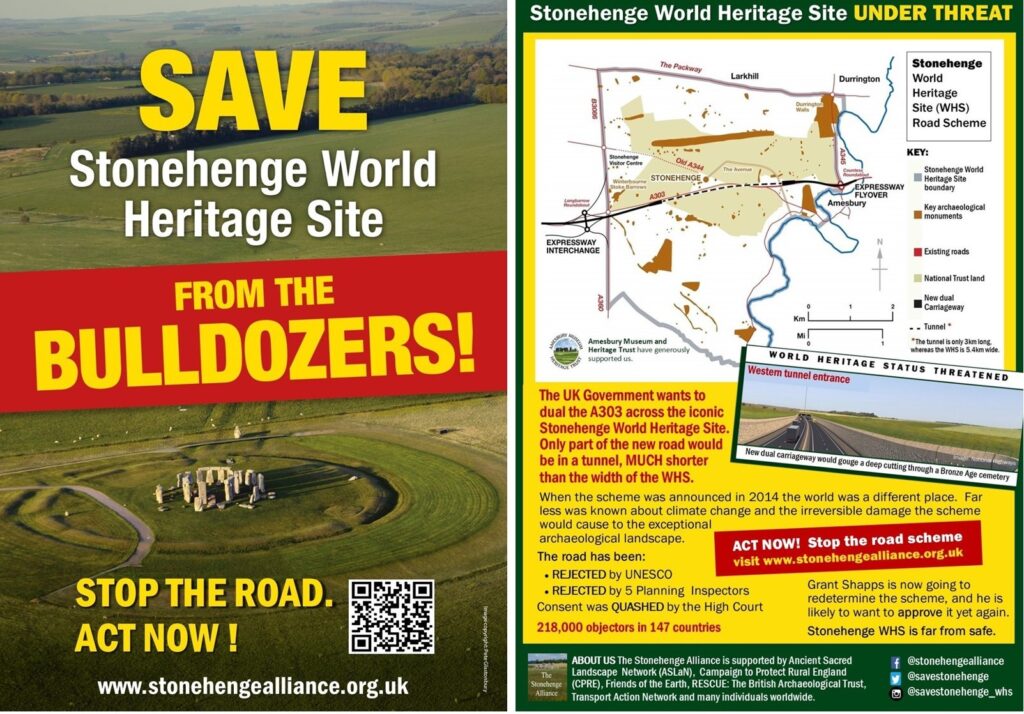 The road scheme has been REJECTED  by UNESCO, REJECTED by 5 Planning Inspectors, consent was QUASHED by the High Court.  Yet, Grant Shapps is now going to redetermine the road scheme, and he is likely to want to approve it again.  TAKE ACTION HERE.

We have updated our leaflet with the above key message.  Read it  HERE. 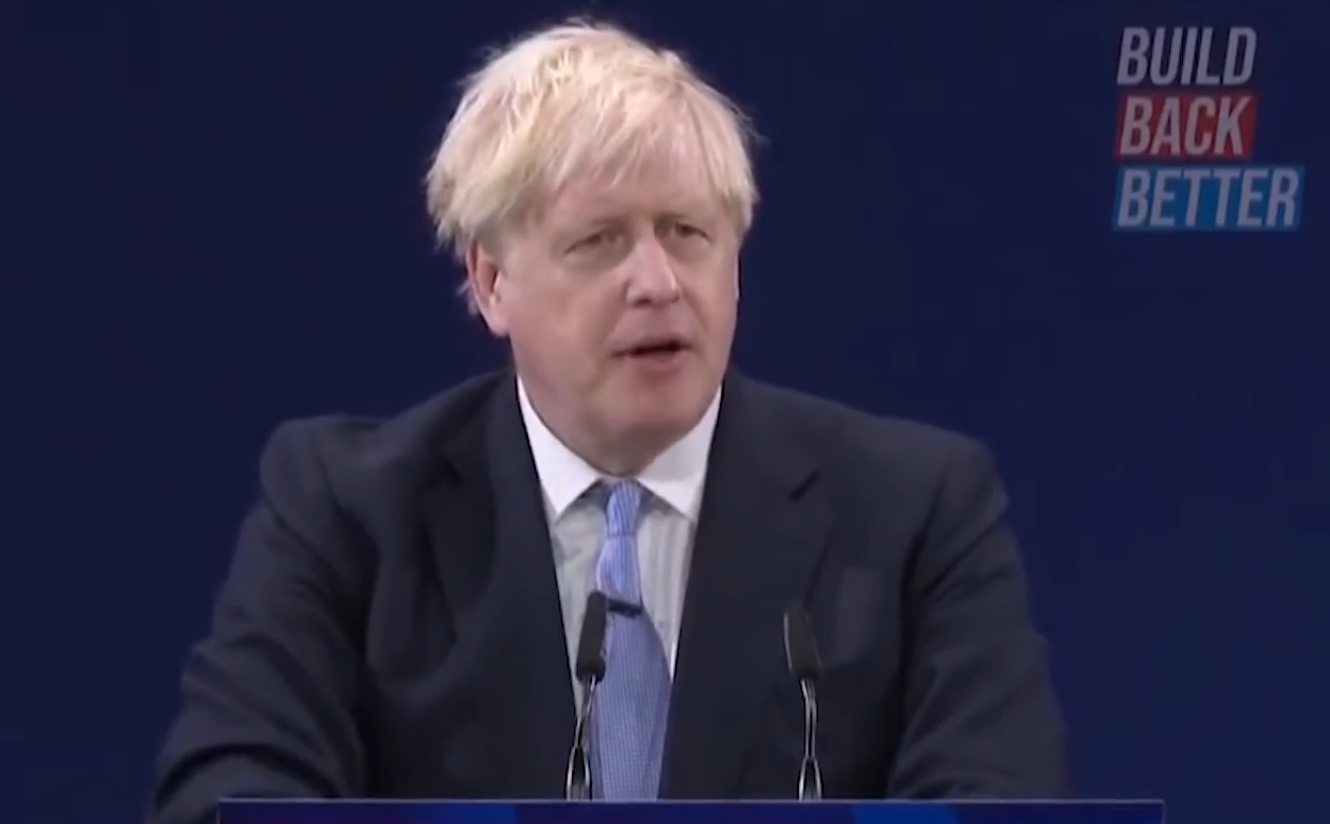 In an open letter the Stonehenge Alliance has called on Prime Minister Johnson to abandon the damaging Stonehenge road scheme and consider an approach in keeping with the demands of environmental commitments. This followed the Government’s decision not to appeal against the High Court judgment quashing development consent for the scheme.  OPEN LETTER WITH REPLY FROM DEPARTMENT FOR TRANSPORT HERE

Letters have also been sent to the Secretaries of State for Transport and Culture, their ministerial teams as well as scheme supporters: Historic England, English Heritage and the National Trust.

John Adams, OBE, SSWHS Director and Acting Chairman of the Stonehenge Alliance, said:  “We could not be more pleased about the outcome of the legal challenge. The Stonehenge Alliance has campaigned from the start for a longer tunnel if a tunnel should be considered necessary. Ideally, such a tunnel would begin and end outside the WHS. But now that we are facing a climate emergency, it is all the more important that this ruling should be a wake-up call for the Government. It should look again at its roads programme and take action to reduce road traffic and eliminate any need to build new and wider roads that threaten the environment as well as our cultural heritage.”  PRESS RELEASE 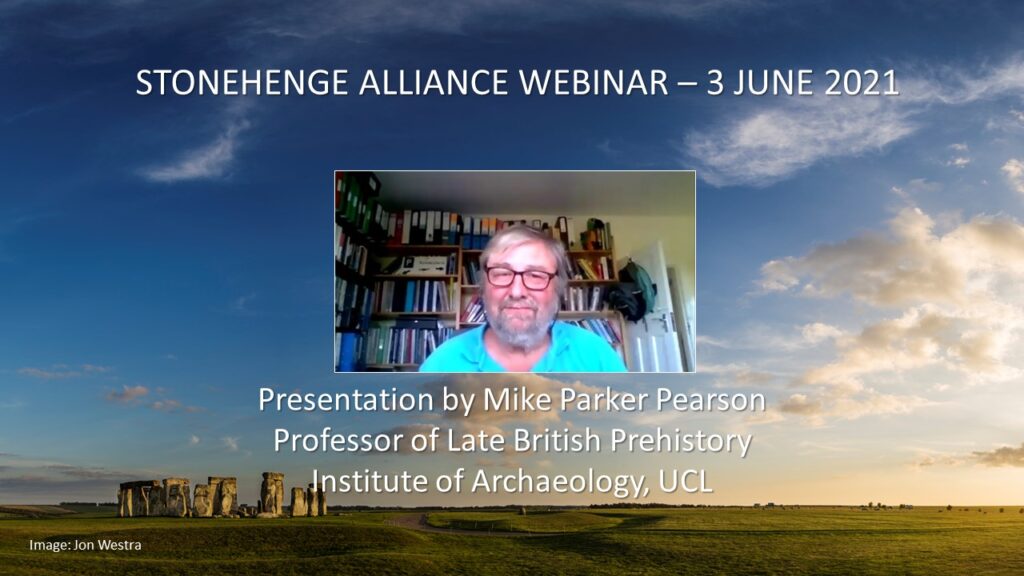 Link to summary, transcript with slides, and video (19:09 minutes) here. 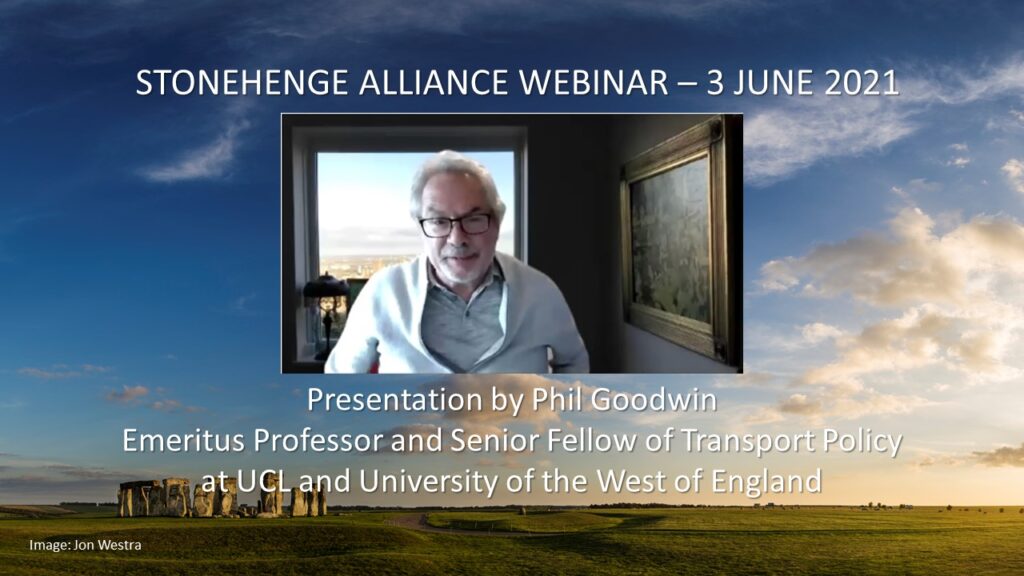 Link to transcript with slides, and video (18:26 minutes) here. 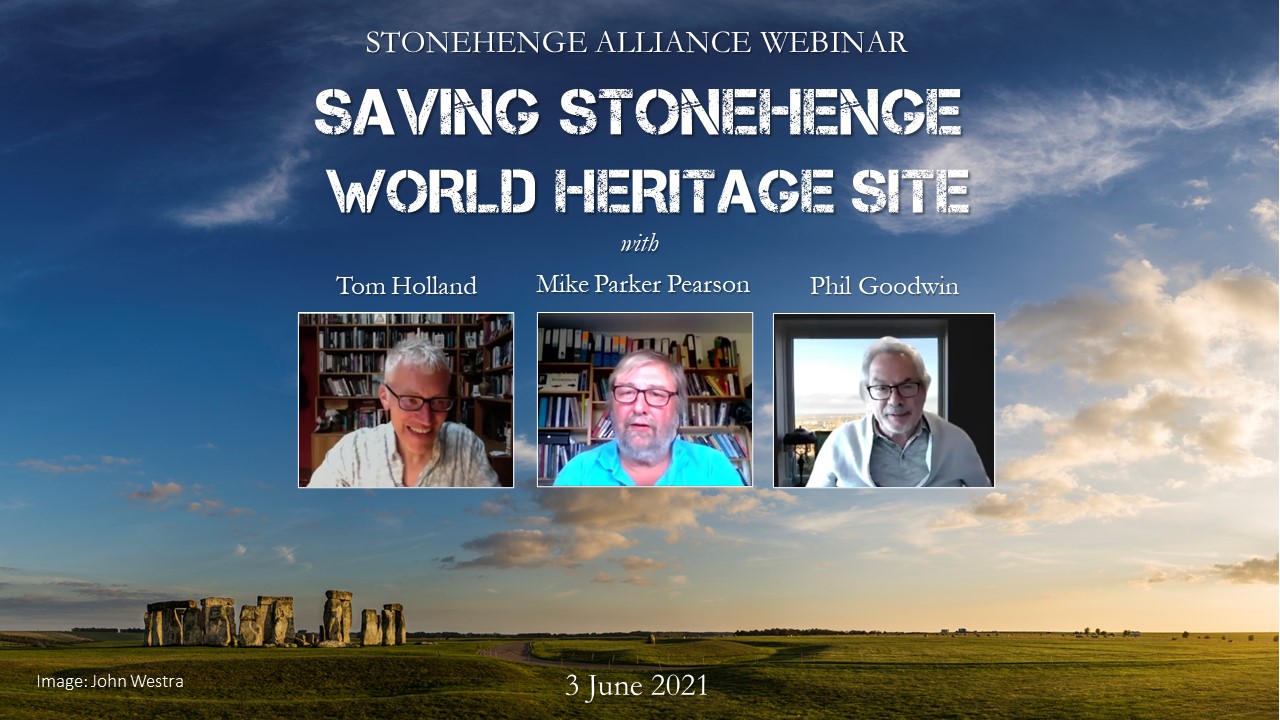 A webinar with Mike Parker Pearson, Professor of British Later Prehistory at the Institute of Archaeology, UCL, and Phil Goodwin, Professor Emeritus and Senior Fellow of Transport Policy at UCL and the University of the West of England,  explaining why Britain’s most iconic World Heritage Site should be saved from irreparable damage from the catastrophic A303 Stonehenge road widening scheme. Chaired by Tom Holland, Stonehenge Alliance President and award-winning historian, author and broadcaster. WATCH WEBINAR IN FULL HERE

A303 Stonehenge Examiners recommended refusal. Why? 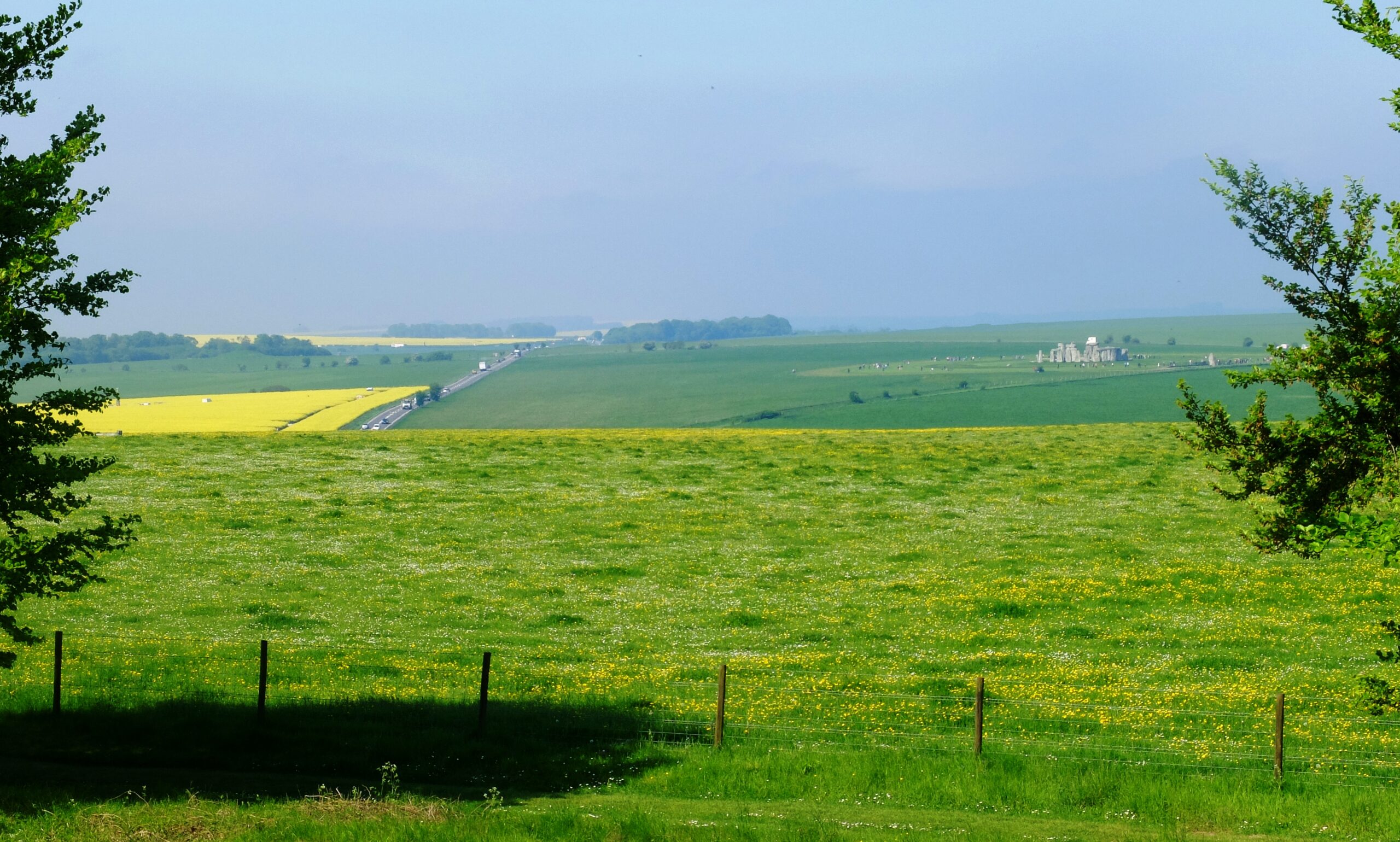 Since the decision by Transport Secretary to drive a chasm through Stonehenge World Heritage Site we have faced a flood of communications via various platforms expressing grief, shock and bafflement not least because the independent Examining Authority recommended it be refused permission saying that the effects on the WHS and historic environment would be ‘significantly adverse’  and ‘irreversible’.  READ MORE 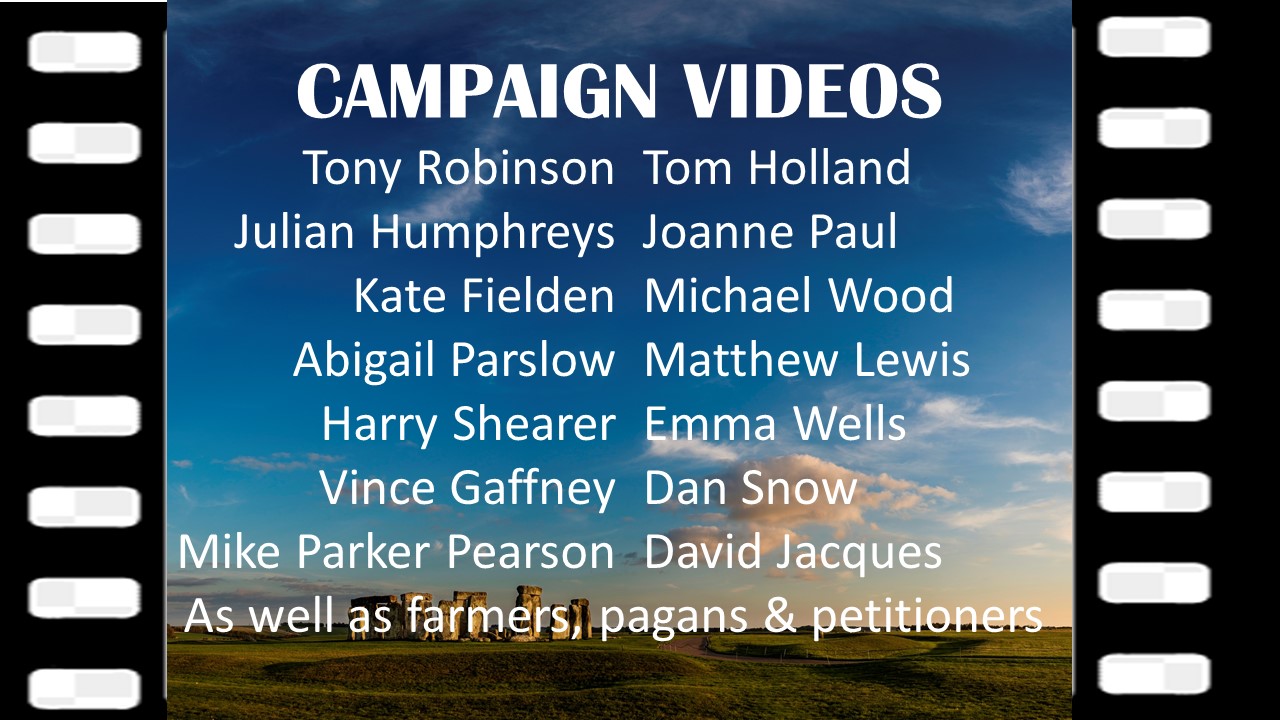 Selection of videos by those who object to Stonehenge road plans, or videos giving voice to objectors as well as informative videos about the scheme.  Some videos were first published on Twitter, Facebook and Instagram… CONTINUE READING