Wiltshire Council manages the Coordination Unit for the Management Plan for the World Heritage Committee for Stonehenge, Avebury and Associated Sites with Historic England  and employs the County Archaeologist.

The local authority has special responsibilities in the A303 Stonehenge scheme Development Consent Order process, its consultation, its local impacts, representations and monitoring. These duties and obligations are summarised in a Cabinet report on 15 March 2016 (See Item 39, page 223 here).

Wiltshire Council is the

The following are key stages in the Council’s involvement and influence over the A303 Stonehenge scheme.

Consultation on the Wiltshire Draft Climate Strategy launched.  Whilst Wiltshire Council acknowledge that transport is the greatest emitter of greenhouse gases in Wiltshire (45%), the transport objectives do not include incentives not to use the car, nor is it proposing a moratorium on road building which is known to increase car use.

Transport objectives and plan can be found on page 18.

We want to hear your views on this draft strategy. Please have your say during our consultation period which runs from 1 September to 17 October 2021.

Consultation events around Wiltshire are listed here.  Please complete their sign up form if you wish to participate.  There are drop in events at Wiltshire’s four libraries: Salisbury, Trowbridge, Devizes and Chippenham.  Deadline for responses: 17 October 2021.

“Wiltshire Council is urging the Government to confirm its support for the vital £1.9bn transformation of the A303 at Stonehenge to reduce the intrusion of the traffic on this busy road, an end the rat run situation for local residents.” 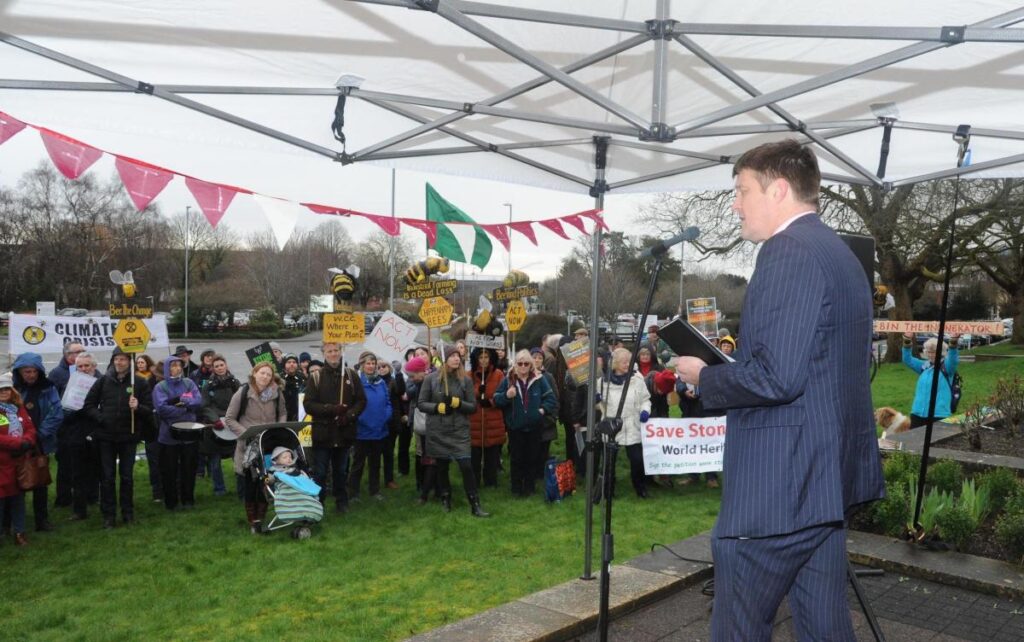 Demonstration by Wiltshire Climate Alliance at County Hall, Trowbridge, on 26 February 2020 and address by then deputy leader, Richard Clewer (current leader), said that Wiltshire Council was doing all it could within its tight budgets to meet its objective of being carbon neutral by 2030.  Wiltshire Council’s pledge.

Wiltshire Council “resolved to acknowledge a climate emergency and to seek to make the county of Wiltshire carbon neutral by 2030.” A Global Warming and Climate Emergency Task Group was set up to gather evidence and come up with recommendations on achieving net zero. “Our Cabinet subsequently committed to also make the council carbon neutral by 2030.”

A new carbon reduction strategy will be prepared to enable us to meet these commitments.  The plan will be evidence and data led and a baseline assessment will be undertaken to assist in identifying needs and determining priorities. It is proposed that the plan will include a community led approach which engages, empowers, enables and communicates with Wiltshire communities and businesses.

Cabinet resolution about the A303 Stonehenge scheme proposed was discussed and signed off in order to permit procedure of the DCO (Development Consent Order) at their meeting held on 24 April recorded as Minute #223 here.

One councillor thoughtfully objected, likening the tunnel to “pay per view on TV”, the rest supported the scheme. The brief discussion revealed that the Scrutiny Committee had not had time to meet but exchanged views by email and included a somewhat misleading statement by the leader who stated that the World Heritage people UNESCO ”don’t like you seeing the stones, they want the setting of the stones without the road in it” failing to mention UNESCO’s previous grounds for objection to a short tunnel.

Whilst Wiltshire Council approved the plans for the A303 by Stonehenge they have listed numerous considerations and significant information gaps that have yet to be resolved such as lighting at junctions, traffic and environmental impacts. We strongly disagree, however, with the Council’s assertion that this scheme fulfills their policy commitment to safeguarding historic sites, nor do we agree that the improvements will boost the local economy to the extent that it will “thrive” as a result of the perceived “benefits”. Evidence reviewed recently does not support that assumption.

The evidence for economic benefits of road building is largely wishful thinking. In our recent paper, we cite reports from government services in the 1970s and 1980s which questioned supposed benefits like employment generation and cost reductions for industry. Transport costs are a fraction of total production costs and so are marginal. Even a study of something as iconic as the original Severn Bridge crossing linking England and Wales could find no impact on economic growth and regional development.

More recently the What Works Centre for Local Economic Growth reviewed around 2,300 evaluations of the local economic impact of transport projects from the UK and other OECD countries. It found only 17 robust studies of the effect of road schemes on the local economy. The main finding was that a majority of evaluations showed no (or mixed) effects on employment.

Extract from The UK transport policy menu: Roads, roads, and a dash of multimodalism by Dr Adrian Davis published in Campaign for Better Transport blog.

Cabinet Minutes of the meeting held on 14 March record resolutions which can be seen as Minute #35 here.

Council officers from a variety of technical services have reviewed the public consultation material and their analysis is collated within Appendix 1 (p 241 onwards). This is intended to be submitted to Highways England as the Council’s formal response to the consultation.

The Council has been encouraging government to improve this road, and therefore now welcomes the proposal from Highways England to bring substantial improvements to A303 by building a dual carriageway and a tunnel.

Subject to successful resolution of the issues identified above and in Appendix 1, on the whole officers recommend that the proposed routes for the A303 Amesbury to Berwick Down scheme are supported. Where there is a preference in relation to options for the section at Winterbourne Stoke, this is included under various headings at Appendix 1. 15. However, whilst it is recognised that the design proposals are still at a very early stage in the development process, it is necessary for further information to be made available to the Council in order for it to fully assess the proposals. (Our emphasis)

Arrangements have been established for the Council to fully engage and manage the project.  The estimated resource implications for the various professional areas are detailed in a Cabinet report considered on 11 October 2016 (Cabinet Papers Item 118).

The Development Consent Order process and the role of Local Authorities within the DCO process is the subject of a Cabinet report on 15 March 2016 (Item 39 page 223).