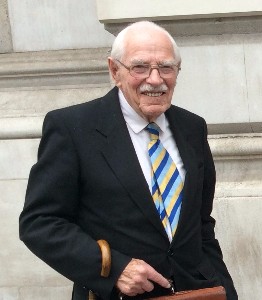 George McDonic outside Department of Culture Media and Sport, Whitehall,  2016

George McDonic, a qualified barrister and Chartered Town Planner, retired from the post of County Planning Officer and Director of Environmental Services in Wiltshire in 1987 and was a Past President of the RTPI in 1986/87.  He took part in Department of the Environment and English Heritage working groups on the future of Stonehenge in the 1970s and 1980s and never lost his concern for the well-being of this special place. He was chairman of CPRE Wiltshire for many years and was awarded the MBE in 2004 for his services to conservation.

A founding representative of the Stonehenge Alliance, George’s knowledge and experience were of enormous benefit to our campaign to protect the World Heritage Site from major developments that would impact adversely on its landscape and archaeology.

Born in 1927, he saw the development of conservation principles in planning over his lifetime and, although saddened to see a decline in those safeguards in recent years, continued to champion them, undaunted by neglectful authority. We have lost a wise and greatly respected friend.