– The Stonehenge Alliance deeply regrets the decision by the Transport Secretary, Grant Shapps to give permission for the A303 Stonehenge Tunnel scheme on 12th November 2020.

– The decision to drive a chasm through Stonehenge World Heritage Site sent shock waves around the world, not least because the independent Examining Authority recommended it be refused permission. The decision goes against the advice of UNESCO’s World Heritage Committee, it will undermine the UK’s legal commitment to address Climate Change and is contrary to the advice of many experienced archaeologists.

– A judicial review challenge made by Save Stonehenge World Heritage Site Ltd, a group formed by a number of supporters of Stonehenge Alliance, has been successful in the High Court and the DCO has been quashed.

The Transport Secretary is in the process of redetermining the DCO application.  As part of that process the Secretary of State has written a Statement of Matters (30 November 2021) for National Highways to respond to (by 11 January).  Comments will be invited once their responses have been completed (their responses have been listed and linked here).  Meanwhile government officials have suggested that the scheme should be carried forward to the next Road Investment spending period, RIS3.

The A303 Stonehenge scheme is one of eight planned improvement schemes along the A303 /A358/A30 corridor.  Highways England admit that the travel time benefits would not be achieved until all eight schemes have been completed.  Only three schemes have been funded.  The eight schemes that make up the new A303 Expressway are illustrated in the map below. 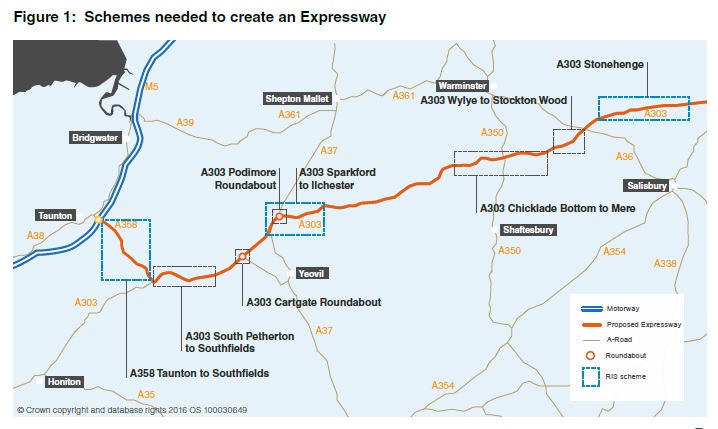 The A303 Stonehenge (Amesbury to Berwick Down) road scheme is on of eight improvement projects. Three of which have secured funding.  The benefits of the Stonehenge section will not be realised until all eight schemes have been completed.  Source: National Audit Office 2019

The A303 Stonehenge Scheme Examination was undertaken in 2019 and the Examining Authority’s Report was submitted to the Secretary of State for Transport on 2 January 2020.  His decision on the Scheme was twice delayed and announced on 12 November.

The Scheme would upgrade the A303 to Expressway standard with a short c.3km tunnel with twin portals in deep dual-carriageway cuttings, all within the World Heritage Site (WHS), and two grade separated junctions on its boundaries.   The WHS is 5.4km wide thus the tunnel would cover some 60% of the Site.  See images of Highways England’s proposal.[2]

The Chancellor indicated in his Budget speech on 11 March 2020 that Her Majesty’s Government continues to support the scheme.

“Each State Party to this Convention recognizes that the duty of ensuring the identification, protection, conservation, presentation and transmission to future generations of the cultural and natural heritage referred to in Articles 1 and 2 and situated on its territory [i.e., its designated World Heritage Sites], belongs primarily to that State. It will do all it can to this end, to the utmost of its own resources and, where appropriate, with any international assistance and co-operation, in particular, financial, artistic, scientific and technical, which it may be able to obtain.”

HMG has invited three joint UNESCO World Heritage Centre/International Council on Monuments and Sites (ICOMOS) specialist missions (in 2015, 2017 and 2018) to see and advise on the A303 Stonehenge proposals. The 2018 Advisory Mission’s report [4] recommends exploration of bypass and longer tunnel options, saying the road scheme “should not proceed in its current form”.  UNESCO’s World Heritage Committee Decisions in 2018, 2019 and 2021 [5] reiterate that advice.

4. Archaeological damage that would arise from the A303 scheme

The non-statutory consultation (2017) on route options was deeply flawed in offering a short (2.9km) tunnel under only part of the WHS, with bypass options to the west for Winterbourne Stoke village, i.e., a single option for the WHS, damaging to both the Site and its setting.

The 2018 Statutory (February–April) and supplementary (July–August) consultations on the Preferred Route were similarly highly unsatisfactory.

6. Cost and value for money

“10.5.12.  Based on those impacts that can be quantified, the Scheme is likely to lie within the low-medium value for money category of schemes.”

“10.7.1. A conventional approach to appraisal, which focuses on the traffic related benefits delivered to users of the road network, would suggest that the scheme has low value for money. However, this fails to capture the full range of benefits of the scheme and doesn’t include the value of removing the current road from Stonehenge WHS which is a key benefit of the new scheme.”

Important note: the scheme would not remove the road from the WHS.

The Whitehall Monitor 2018 [9] (Fig. 6.5 et seq.) gives a red delivery confidence rating for the A303 Stonehenge scheme in 2017: i.e., successful delivery appears to be unachievable.

7. Who stands to gain? (supporters of the Government’s scheme)

8. Who stands to lose from the scheme?

Other events have arisen since completion of the Scheme Examination, and subsequent High Court Judgment, to some of which we have already drawn the Transport Secretary’s attention.

On 27 February 2020 a judgement against a 3rd runway at Heathrow was won by climate change campaigners, in part based on HMG’s commitment to net-zero carbon emissions by 2050. This has implications for new road building and a challenge has now been brought by the Transport Action Network against HMG for its next Road Investment Strategy (RIS2), which includes the A303 Stonehenge Scheme.  That challenge, having been lost, is now subject of an appeal.

Government advisers, such as the Office of Rail and Road, suggest that the roads investment strategy should be re-examined. The Committee on Climate Change, in its June 2020 Report said that, in terms of net zero carbon emissions, “we are not making adequate progress in preparing for climate change”; and that “Overall, the Committee recommends that investments in low-carbon and climate adaptation infrastructure must be at the heart of measures to restore economic growth following COVID-19.” The report places emphasis on home working, stating that “higher investment in resilient digital technology including 5G and fibre broadband should therefore be prioritised over strengthening the roads network.”

The International Panel on Climate Change Report published on 9 August 2021 underlines how serious the position is. There is an increasingly urgent need to reduce carbon emissions and fast – building high carbon infrastructure which willresult in more emissions is the wrong direction of travel.