Several hundred concerned individuals have written recently to Hilary McGrady, Director-General of the National Trust, about the Trust’s support for the A303 Stonehenge road widening scheme. In response, correspondents have shared the following standard reply from Ms McGrady. 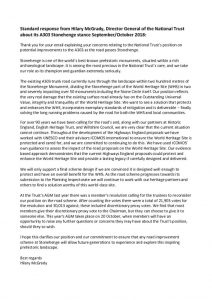 Taking these statements in order of appearance in your letter, you say that:

The Stonehenge monument is in the care of English Heritage.

This is something that the c.3km tunnel supported by the Trust cannot possibly achieve.

Please would you let me know where I can find evidence of the Trust’s efforts over this time to remove the A303? Are you aware that the A303 in its present form dates to the late 1960s and that the Trust released land for its dualling and realignment, rather than for its removal?

You may also be aware that, at the time of designation of the World Heritage Site, the A303 was not mentioned as being a problem. Indeed, I would be interested to know what suggestions the Trust had 90 years ago for replacing the A303 at Stonehenge, should it be ‘removed’.

The Trust’s ”evidence based approach” is evidently seriously flawed if the Trust thinks that Highways England’s proposals could ever “protect and enhance the World Heritage Site”. The tunnel is far too short to achieve that aim.

Why then does the Trust support a c.3km tunnel which will not “protect and have an overall benefit for the WHS”?  There is little time left for the Trust to work with ‘heritage partners’ and ‘others’ to ”find a solution worthy of this world class site” before the Development Consent Order application is made to the Planning Inspectorate.

This explanation fails to reveal that the resolution was to uphold its founding principles and that voting on the members’ motion on Stonehenge, according to the Trust’s own record, was as follows:

Thus, the specified vote was fairly close and the motion was lost because the chairman cast the 6,710 discretionary votes against rather than for the motion.

It would, of course, be widely welcomed if the Trust’s stance were to be changed to one of commitment to protecting the entire World Heritage Site and its setting.  If that were to occur, and I sincerely hope it will, then the Trust could obviously not be a supporter of the c.3km tunnel scheme.