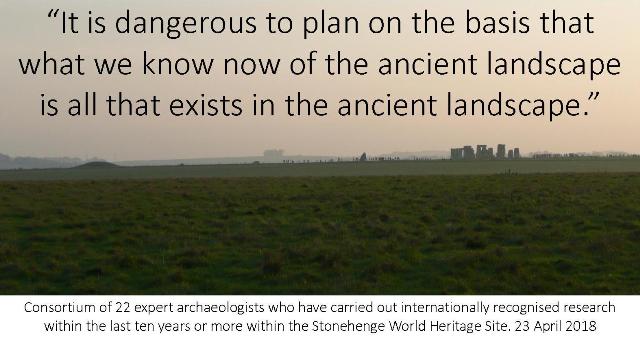 Responses to both Highways England’s consultations (2017 and 2018) submitted by other organisations. This page is regularly updated.

Founded in 1994 the Avebury Society is a Civic Society that speaks for its members on matters that affect Avebury and surrounding villages.  The Society appoints representatives to various World Heritage Site Management Committees and is affiliated to the Council for British Archaeology.

2017 – Objection to Stonehenge proposal is here.

2018 – Objection to Stonehenge proposal is here.

Campaign for Better Transport (formerly known as Transport 2000) are members of Stonehenge Alliance.

The signatories of the joint objection to Highways England are senior archaeologists who have carried out internationally recognised research within the Stonehenge WHS within the last ten years or more.

The CBA has had a long history of engagement with the Stonehenge and Avebury World Heritage Site, principally associated with the management of Stonehenge and the surrounding landscape.

In early 2016, CBA trustees revisited earlier documents which had previously informed the CBA’s engagement with Stonehenge, and in April agreed a revised and updated set of Cardinal Principles which the CBA believes are crucial in considering the management of the monument and its surrounding landscape. They are particularly important in relation to any proposal for the A303 within the World Heritage Site which might be published for consultation in 2017.

The revised Principles were adopted at the AGM in November 2016 here.

2017 – Objection to Highways England by CPRE South West can be found here.

Friends of the Earth

Honouring the Ancient Dead is a British initiative that advocates respect for what are commonly called ‘human remains’ and their related funereal artefacts.

2017 – Their summary response can be found here and full response here.

ICOMOS-UK is the UK committee of ICOMOS International that advises on aspects of World Heritage and sites for nomination across the UK. It is an independent charity with a UK-wide and international mission to promote and support best practice in the conservation, care and understanding of the historic environment.

2017 – ICOMOS-UK has objected strongly to Highways England’s proposal for a short tunnel across the WHS. Read their response here.

2018 –  “ICOMOS-UK registers a strong objection to the proposals in view of “the substantial negative and irreversible impact we believe that the dual carriageways at both ends of the tunnel would have on the attributes of OUV of the WHS of Stonehenge”. Full response here.

The Prehistoric Society promotes the preservation of and research into all aspects of human prehistory.

Rescue is a member of Stonehenge Alliance.

Royal Society for the Protection of Birds (RSPB)

The RSPB objected to the published proposals in 2017 because of the direct impact on the rare ground nesting stone-curlew’s nesting territories in the Normanton Down Reserve and elsewhere on the Salisbury Plain.

2017 – objection can be read in full here.  A summary is available here.

April 2018: The RSPB has reiterated its position and objection here.

April 2019: Despite changes to the scheme the RSPB reiterated its concerns here.

2017 – The Policy Committee of the Society of Antiquaries tend to agree with some reservations, subject to further detail.

The Wiltshire Museum archaeology collections are among the finest in Britain, trace the history of people living in Wiltshire in a series of galleries – Neolithic, Bronze Age, Iron Age, Roman, Saxon, and Medieval. The collections on display include important finds associated with the World Heritage Sites of Avebury and Stonehenge including gold objects excavated from Bush Barrow near Stonehenge.

The Society has a long association with Stonehenge.  In 1883 when two railway lines were planned to run across Stonehenge Down the Society led a successful campaign against them.  A few years later the Society was involved in gaining protection for the stones under the Ancient Monuments Act.  In the 1920s leading members of the Society purchased 1,500 acres of land around Stonehenge as part of a national appeal to protect the landscape.  All this land is now in the care of the National Trust.

The Society ha actively campaigned for solutions which will minimise the impact on the area’s archaeology.

The A303 runs through the village of Winterbourne Stoke. They are surprised that they have not been considered statutory consultees and frustrated by the lack of data and answers to technical questions about impacts. Link to the Parish Council’s response is in two parts.

2017 – The Stonehenge Expressway: An eloquent emblem of a failed transport policy

Links for responses from Historic England, English Heritage, the National Trust and UNESCO.